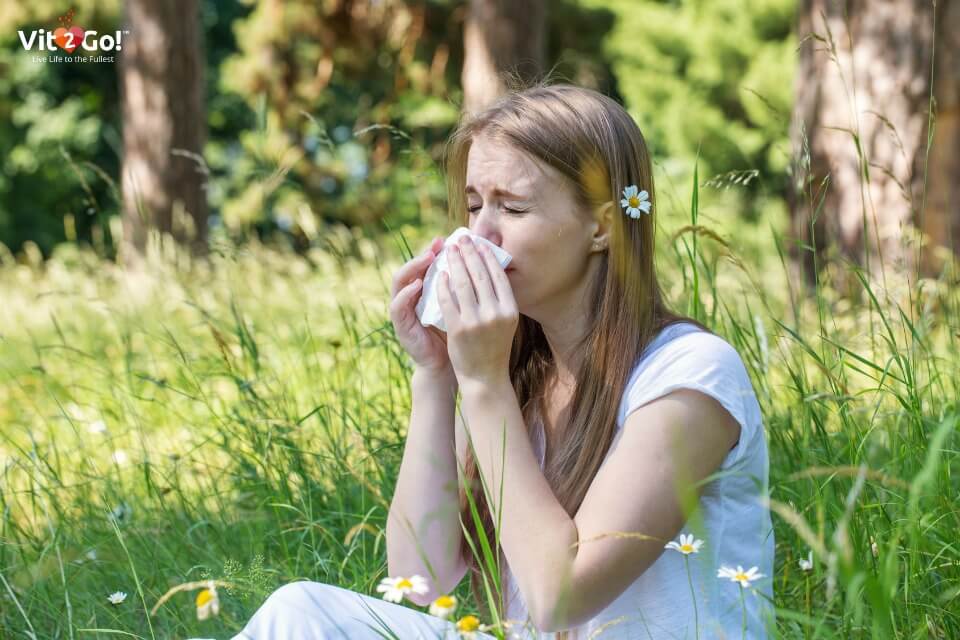 Pollen allergy and hay fever – How to combat symptoms

As the weather is changing from cold and snowy to warmer and sunnier with the coming of spring, millions of people around the world don’t really get to fully enjoy all the beauty of the nature waking up due to hay fever and pollen allergies, which are a very common issue that millions suffer from.
Hay fever season usually starts in early spring and so does the season of pollen allergies. Both conditions are associated with pollen expelled from plants and trees in spring and summer time, although fay fever can also be related to allergies to other things such as dust mites or animal dander.
Whether you suffer from seasonal allergies or perennial hay fever, you may not be able to enjoy many activities that other people find completely normal, so it may be time for you to start looking for the right pollen allergy remedy or hay fever treatment or look to products like Vit2Go! Immune System Booster to improve your immune activity and get the conditions under control.

Hay fever is one of the most common conditions in humans, with 35 million people suffering from it just in the USA. The condition can come in two forms. The first form is the seasonal hay fever caused by allergies to pollen, which can come from trees, grass or weeds and can appear in spring, summer and autumn alike, as different types of plants have different pollinating seasons. The second form is the perennial hay fever, which is caused by allergic reactions to things you will more likely encounter indoors such as dust mites, skin flakes or feathers of various animals you may have as pets.
Whichever type of hay fever you suffer from the symptoms are pretty much the same. Your immune system will recognize the pollen, dust mites or skin flakes as dangerous substances, and will start the processes that it usually uses to expel such substances. Your body will be flush with histamine and other similar chemicals which will cause your nose to run, various parts of your body to get inflamed and swollen, your eyes to become watery and sneezing to occur very often. All these processes normally expel dangerous substances, but in this case, there is no real need for it.
Also known as allergic rhinitis, hay fever is usually not too alarming from a medical standpoint but can be quite annoying to deal with. If you do suffer from hay fever, you will want to irrigate your nose or use an over the counter nasal spray to remove pollen or dust articles from your nose, which will reduce the symptoms of the condition for a limited time. Such hay fever cure is most common, but using a product such as Immune System Booster to make your immune system more resistant may also help reduce or eliminate the symptoms of hay fever.

Quite similar to hay fever, pollen allergy is a condition that usually strikes in the spring, and if you have it, you probably know about it by now. Every spring, as plants start to grow, your nose starts to run, you sneeze like crazy and there doesn’t seem to be a really good reason for it.
Pollen allergy is a condition where your body recognizes pollen particles as dangerous and attempts to expel them through sneezing, coughing and running nose. In addition to sneezing and a runny nose, your throat may also get itchy, your eyes watery and your nose stuffed.
When this happens, it is time to look for a pollen allergy remedy and while there currently isn’t a cure out there that would completely eliminate pollen allergy symptoms, using vitamin boosters such as Immune System Booster can significantly improve the way your body handles these types of conditions, which is why we strongly recommend them for anyone suffering from a condition like pollen allergy or hay fever.

Immune System Booster is a powerful product with many positive effects, designed to boost your immune system and make you less prone to illnesses, diseases and all sorts of other medical conditions. Allergies such as pollen allergy and hay fever fall into this category, as the vitamins, minerals and other nutrients found in the product will surely make your system a lot more resistant to all types of invasions.
While pollen and other allergens that usually cause allergies are not really dangerous to your body, a poor immune system may very well recognize them as such. A strong and powerful immune system, on the other hand, will likely keep a better control of what it deems as dangerous and you will not have to suffer from all the same symptoms every single season if you are using this potent vitamin booster on a regular basis.