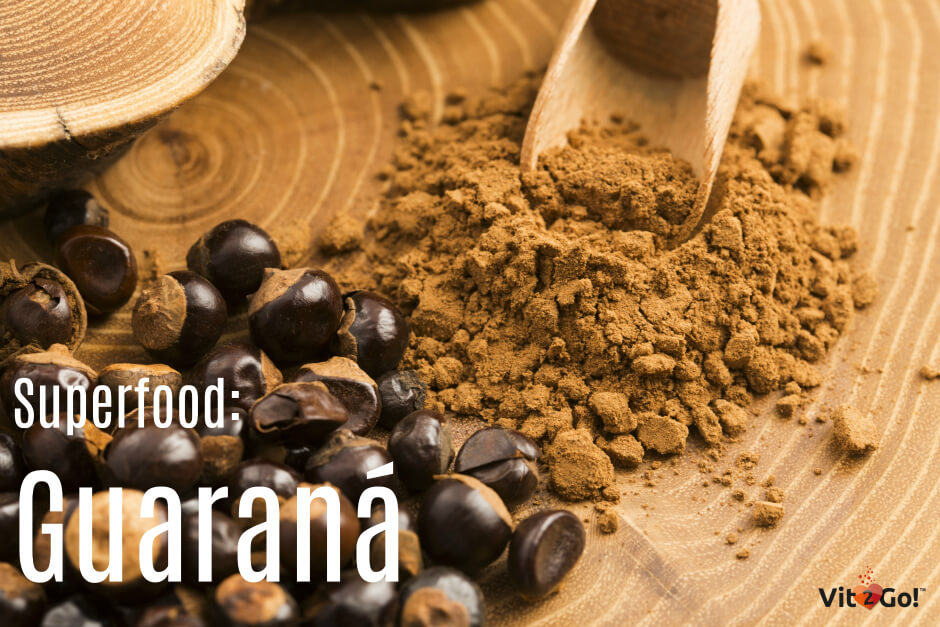 Most people in the Western world are more or less hooked on coffee, and the main reason for that is the stimulating effect of the caffeine found in coffee. However, there are much more powerful stimulants out there than coffee and guarana is definitely one of them.
Also known as Paullinia Cupana, the south American plant contains more caffeine than coffee and its stimulating effects surpass those of coffee by quite a bit. In addition to being a great stimulant to get you through the day, this superfood also works wonders for concentration, memory and libido.
These versatile effects of the plant have made it extremely popular in Europe and the USA as well, with many energy drinks nowadays containing guarana extract along with other ingredients. Natural Energy Booster by Vit2Go! is one such product which uses guarana to improve its effects on the overall mood, concentration, memory and cognition of the individual consuming it.

The positive effects of guarana

Guarana has been used in those nations where the plant is easily accessible, especially in Brazil, for centuries. In the more modern age, guarana spread throughout the world, and aside from being present in a number of soft drinks produced in Brazil, it is now also commonly found in western drinks and products of all sorts.
The main effect of guarana is definitely its stimulating power. The plant’s extract does wonders for one’s cognition, increasing alertness, memory and improving the overall mood significantly. People who need to stay up long into the night or can’t afford too much sleep often use guarana based products to stay alert even when they should be sleepy and tired.
Unlike many other products that only claim to be effective, guarana was actually tested in a number of clinical studies. Studies done on rats have shown that guarana directly stimulates the brain and improves cognitive function and mood and numerous human studies have also come up with similar conclusions, although sometimes incomplete or not as statistically relevant.
Another great benefit of guarana is related to weight loss. A study conducted over a 45 week period showed its participants lost an average of 11 lbs after consuming just 75 mg of guarana per day. Other studies have shown similar results and all indications point to guarana burning fat even without increased physical activity.
In Brazil and the rest of South America, guarana is also often used as a sexual stimulant, as it appears to improve libido and erectile function and makes for a great sexual aid as well. Overall speaking, the effects of guarana are mostly positive and the plant appears to be a fantastic substitute for coffee or workout stimulants such as xenedrine.
The side effects of guarana are almost nonexistent when taken at normal dosage. While some people report mild jitters, which is to be expected from any stimulant, other side effects of caffeine and related products do not appear to be present with guarana consumption, which is another great reason to take guarana instead of coffee.

Boost your energy levels with guarana

If you are sick of always feeling tired and sleepy, guarana may be your solution. Unlike coffee or redbull, guarana is a natural product, which means the side-effects you can expect from it are mild and almost nonexistent. Additionally, the benefits of guarana simply outdo coffee or red bull by quite a bit, making guarana an excellent addition to your diet.
Guarana can be used as a pre-workout product, as a sexual aid or even as a general mood and energy booster. If you need some help waking up in the morning or staying up through a difficult work day or a long night of studying, guarana is a better alternative to coffee or redbull as it does not cause a crash when the effects expire.
Guarana is not really sold as a standalone product very often outside of South America, so if you live in the West, you will have to buy products containing the extract of this potent plant. Natural Energy Booster by Vit2Go! is one of the finest products based on guarana that you will find on the market, as the potent drink helps you improve your mood, concentration and physical and mental energy levels without the nasty side-effects that many other similar products cause.
According to most experts, guarana is likely to become the next big thing in the world as people realize its benefits and lack of side-effects compared to the more caffeine based products which are not 100% derived from plants. One day, we may see all pre-workout and energy boosting products based on guarana, but for now products like Natural Energy Booster are probably your best bet in finding a reliable and natural solution to improving your energy levels.