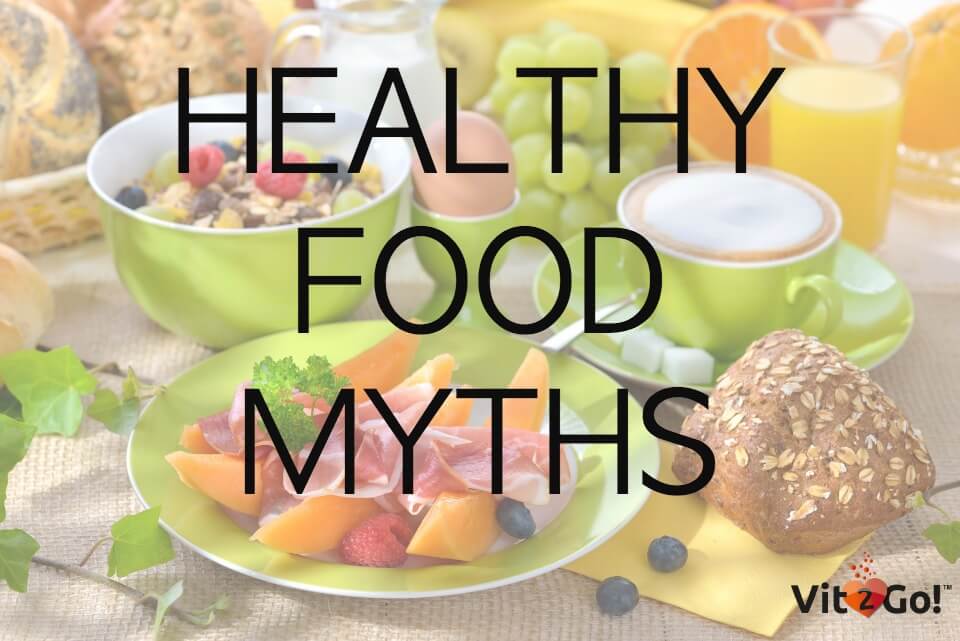 As nutrition science has evolved, especially during the last decade or two, people have come up with a whole lot of very useful tips that can really help you maintain high energy levels, keep a lean body figure or build up some muscle faster than you normally would.
We now understand how macronutrients like protein, carbohydrates and fats work as well as the importance of micronutrients like vitamins and minerals. However, there are a whole lot of food myths out there that simply don’t quite sync up with actual science and despite what they claim, they are simply not real.
Today, we are looking at some of the top food myths that are not true and exposing them for what they are with a special focus on a few energy food myths that have been around for a while and have completely misinformed you. Keep reading and find out how to really stay energized and what energy food myths you should avoid at all cost.

One of the most ludicrous claims ever made in the history of nutrition science is that certain foods burn more fat than they create, or rather that just eating them will burn calories instead of adding them. Even the most low calorie things in our diet like water still contain a very small amount of calories, and the items found on the list of the supposed negative calorie foods most certainly do.
The most commonly found items on these lists include vegetables like celery which contains 10 calories per stalk and watermelon, which contains 46 calories per cup. Some lists even go as far as putting chicken and other lean meat on the list, which is simply out of the question as meat has plenty of calories despite a lot of it coming from protein and being very healthy.
The basic nutritional fact is that all food you ingest has a calorie count and these counts are quite easily accessed today so if your “nutrition guru” is advising you to eat a bunch of celery to burn off the fat while charging you $100 per hour, ignore it and find a better way to spend your money.

2. You need coffee to wake up

Coffee is one of the most commonly used cures against morning fatigue, with a large part of the western population finding it “impossible” to wake up without a cup of coffee. I have heard people say there is no way they could wake up without coffee so many times I can’t even remember and while there is something to their theory, it simply isn’t accurate.
Coffee contains lots of caffeine, as you well know, and for most people caffeine does provide a boost that will help them through the day. However, there are several inaccuracies in the aforementioned theory. For starters, there are other ways to load up on caffeine, so drinking coffee is not the only way to wake up. What is more, the impact of caffeine is only temporary and once it wears off, the effects of fatigue kick back in, making you even more tired, which is exactly what happens to many people half way through their work day.
The real problem with waking up on coffee alone is that other than caffeine, coffee contains very little of anything else useful and loading up on micronutrients and having a healthy breakfast will usually get you further than just drinking a cup of coffee and walking off like a zombie.

3. You should always eat your fruit fresh

Fruits and vegetables are important for any person’s diet as they are some of the best providers of micronutrients. However, just like many people believe you should not put any sugar in your tea when you are sick, many also believe that fruit only does anything when eaten fresh, which is simply not true.
The truth of the matter is that fruit contains vitamins, minerals and healthy amounts of natural sugars, and not much of that is lost in processing. For instance, drinking 100% juice from apples and oranges will give you basically all the same nutrients that eating the same amount of the fruit would. Cooking or baking vegetables can take some of the nutrients away, but fruit is healthy and good for you in any form.
The real reason why some people seem to only believe in benefits of fresh fruit is because the processed foods industry has become so frowned upon that they believe anything that is processed in any way automatically becomes unhealthy, which is not a scientific fact.

4. Eggs are just not healthy

Eggs are very common food in most people’s diets, but in recent years, a certain phobia has appeared, with more and more people being afraid of eggs for the supposed health problems they cause. While there is some cholesterol in eggs, studies have shown that eating one to two eggs every day for the rest of our lives would pose no problem, assuming we don’t already have heightened cholesterol.
The reason for this is the fact that once we consume extra cholesterol, the body compensates by creating less of its own, so there is really nothing to worry about with eating an egg or two in the morning. In fact, eating eggs is a great way to start your day as they provide plenty of protein and energy for the day to come, which is what you really need as opposed to caffeine and caffeine alone.

5. Carbs are good way in the morning

This is another thing that most of us tend to believe and base our lives upon but is completely untrue. Eating carb loaded foods like pastries and white bread early in the morning will get you pumped on sugar. While this will give you a quick pick up, it will wear off within hours, leaving you tired, sleepy and irritated.
Instead of eating cereal and white bread in the morning, think about having an egg or two, some whole wheat bread and some fruit. Light breakfast foods that are high in protein and micronutrients and low in carbohydrates are really what you need to get you through the day.

10 Myths about alcohol – True or False?