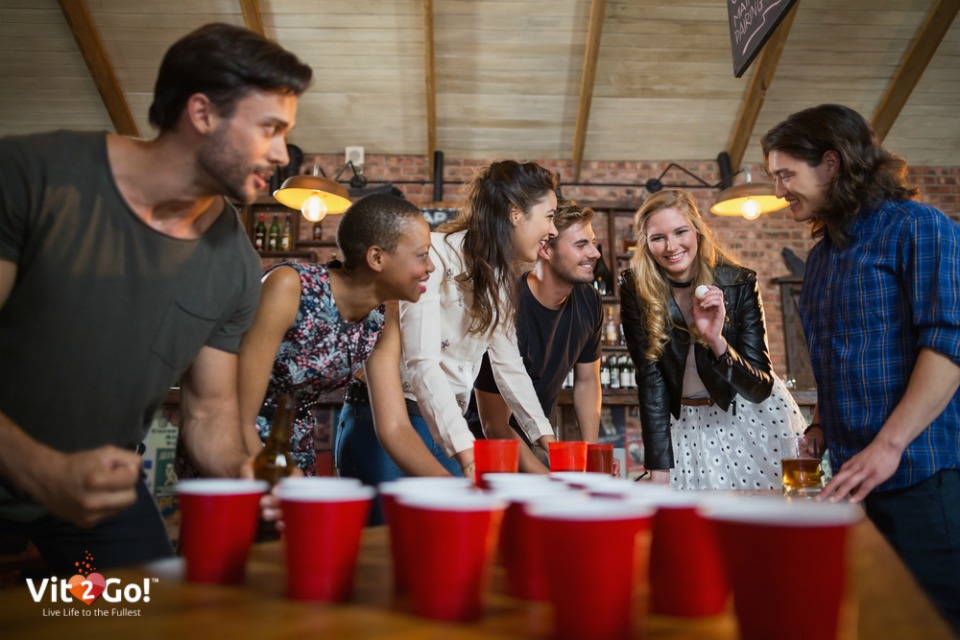 5 fun drinking games you must try out now

This game can be played with as many people as you like, and they all need to get into a circle with drinks in front of them. The person who starts the game has to say one sentence. The sentence starts with “Never have I ever“ and finishes with a statement about what that person has never done in their life. If this statement does not apply to someone, that person needs to take a drink. The next person in the circle continues with their statement and the same thing is repeated over and over again. Statements are usually very interesting and somewhat uncomfortable, but players are expected to be completely honest and of course, end up drunk. If no one has experienced the action in the statement, then the person who came up with it needs to take a drink.

You may know this game by a different name and the Flip cup title is actually pretty self-explanatory. Unlike the “Never have I ever”, this game requires 2 teams that need to cooperate. The competitors are standing on opposite sides of a table, and each member of the team is looking directly at one of the players on the opposing team. They all have a disposable plastic cup filled with a drink – it’s usually beer. The goal of each team member is to drink the beer and flip the cup. The team who achieves that goal first wins. No one can try to flip a cup until the person before them has successfully completed the task. Players cannot use their hands or blow on the cup. They can only flick it or lift the bottom.

Flankyball is more active than the previous two games since it requires running. This is also a team-based game and it’s extremely entertaining. Divide the group into two teams, sit on the floor and put an empty bottle in the middle so players are all the same distance from the bottle (10 paces). Your task is to throw a small ball at the bottle and try to knock it over. Once you do that, the person from the opposite team needs to run out, place the bottle in the same position and run back to their seat. While the opponent is doing that, your team needs to drink. You stop drinking once the player returns and sits on the floor. The winning team is the one that finishes their drinks. They then get to challenge their opponents to do something as a punishment.

Beer pong may be the most popular of all drinking games. It can be played with two teams that have an equal number of members. You need 12 glasses of beer and one ping-pong ball. Place 6 glasses of bear on each side of the table and have each team facing each other. The goal is to throw the ping-pong ball into the opponent’s glass. Once you nail that, the owner of the glass has to take a drink. Your team wins if you empty all the opposing team’s glasses. Then the losing team has to drink everything that is left on your side of the table.

If you like playing the social game called Pictionary, you will love the Drunken Artist. This version provides more fun since the contestants are drunk, and their drawings will be hilarious. After you divide into 2 teams, one person draws a certain term and the team members need to guess what it is. The person who determines the terms also has to start measuring time as soon as the drawing begins. The time that passes until someone guesses the term is crucial in this game. The person who is drawing has to take a sip every 20 seconds that passes if the rest of the team members don’t guess the term. If no one guesses correctly, the person drawing has to drink the entire cup.

How to avoid a hangover after drinking games

As much as you enjoy playing drinking games, you should be aware that it could lead to some serious problems the day after or even that same night. The atmosphere is amazing and you’re all having so much fun that you forget about the number of drinks you had. In order to avoid a nasty hangover after playing fun drinking games choose a drink that you like best and don’t mix different alcohols. Drink a lot of water in between, especially if you’re on a losing team and you find yourself drinking a lot. If you feel like you may have drunk too much, excuse yourself from one round. Another option to prevent a hangover is to take Vit2Go! Hangover Aid. This hangover cure replenishes your body with everything that alcohol takes away during the night of partying. Restoring vitamins, minerals etc. is something you definitely must do in order to feel better, but make sure you don’t deprive yourself from it all in the first place. This is the only way to not worry about a hangover.