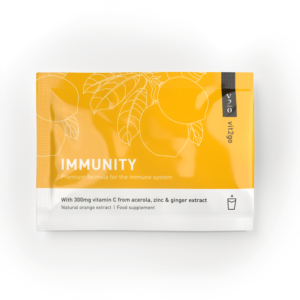 How does Vit2go IMMUNITY work?

IMMUNITY is a refreshing beverage powder with high doses of vitamins, minerals, amino acids and other good nutrients. With natural orange and ginger extract, this drink is perfectly balanced, so it can boost your immune system and prevent a lack of nutritional substances.

Daily life is full of challenges and threats which can weaken our bodies. Stress, lack of sleep, poor nutrition, bacteria and viruses are just a few of the threats to our body’s defenses.

This beverage powder contains high doses of Vitamin C (500 mg per sachet) which for example immediately counteract a cold just beginning to develop by supporting the work of the immune system. So that all defense mechanisms function properly, the body needs further nutritional substances which in IMMUNITY from Vit2go are perfectly tailored to one another. Zinc, also included, is necessary so that the body can better absorb vitamin C.

With IMMUNITY, you won’t have to worry about viruses, bacteria or colds anymore and can live your live to the fullest.

Tips for a healthy life:

The most important active substances in detail:

Apart from the ingredients already mentioned, in the IMMUNITY there are plenty of other good things to support your health.
You’ll find out here what they are and how they help your body:Vitamin C

A lack of Taurine weakens your healthGinger
A root with a positive health effectsVitamin K1
Detoxifies and keeps blood vessels cleanCalcium
Material for strong bonesIron
The oxidation elementSelenium
Defense against pollutantsVitamin A
For good visionStay healthy!
Order Vit2go IMMUNITY now!

Vitamin C: the booster for the immune system

Vitamin C, or ascorbic acid, is an essential substance which the body cannot produce on its own and which has to be supplied through food. Vitamin C supports the white blood cells and thereby stimulates the immune system. The risk of infection is lowered. Protection of the cells through the binding of free radicals is also supported. In addition, vitamin C contributes to an enhanced detoxification in the case of poisoning by heavy metal or environmental toxins. If the body does not get enough vitamin C, for instance through fruits and vegetables, taking a nutritional supplement makes sense.

Zinc is one of the most important trace elements and is contained in all cells and organs of the human body. It is involved in the function of more than 200 enzymes in cell metabolism and therefore of central importance for metabolism in general. Hormones such as insulin cannot be synthesized without zinc. The metabolism of vitamin A, which influences vision, is dependent on zinc as well, which is why a lack of zinc can lead to night blindness. Further, zinc has important functions within the immune system. The trace element is vital for a healthy immunity. In cases of loss of fluids, for instances through perspiration, this can lead to a zinc deficiency.

B Vitamins: a complex for many functions

Altogether there are eight B vitamins, which are frequently offered together as a vitamin B complex. The reason for this is that a sufficient supply of vitamin B is only possible if vitamins B1 through B 12 are present in a balanced way. B vitamins are needed for building co-enzymes and for this reason have a great influence on metabolism in general. The range of effects of B vitamins is extremely complex, which is why one can only generalize with difficulty about their effect. It has been shown, however, that B vitamins do influence the regeneration of muscles, the sensitivity to stress and the strength of nerves in a positive way. Beyond that, the digestive system, as well as hair and nail growth, is influenced by the presence of B vitamins.

Vitamin D3, like vitamin D2, is transformed in the human body to calcitriol, which functions like a hormone. For that reason, vitamin D3 is termed a pro-hormone, or a precursor to a hormone. The functions of vitamin D3 are various, whereby it is especially important for the bones, as it contributes to the creation and maturation of stem cells of the bones. Vitamin D3 supports the immune system by helping cells used in the body’s defense to mature. In addition, the vitamin controls calcium levels and influences phosphate metabolism. Symptoms of a vitamin D deficiency include loss of concentration, fatigue or dizziness. The daily minimum amount of vitamin D3 is set at 5μg for an adult.

L-glutamine is a non-essential amino acid which with a portion of approx. 20% constitutes the primary component within the pool of free amino acids in plasma. L-glutamine is particularly concentrated in muscles cells, where it controls the fluid household and can increase cell volume. An increase in the volume of the cells is interpreted by the body as an anabolic signal and leads to an increase in the production of protein and glycogen. If the immune system is weakened due to stress or a cold, the body needs more L-glutamine than it can produce itself. In that case taking supplemental L-glutamine can then help to improve personal productivity.

L-carnitine is an active substance that is similar to a vitamin and is synthesized by the human body. This substance is found in very small concentrations in many foods such as meat or fish and in dairy products. L-carnitine supports the growth of muscle tissue by helping to supply the cells better with oxygen. In addition the metabolism of fats in the body is supported. In L-carnitine deficiency the winning of energy from fats is decreased. In this case taking additional amounts can help.

Taurine: a lack of Taurine weakens your health

Taurine is an aminoethanesulfonic acid which is produced by the human body itself. The connection with “bull urine” could be related to the fact that taurine was isolated for the first time from oxen bile in the 19th century. Taurine plays an important role in the synthesis of proteins and neurotransmitters. A lack of taurine can lead to disorders of the immune system. To prevent this, taurine –rich foods such as meat, fish or dairy products are recommended.

Ginger: a root with a positive health effect

Ginger root is known in many cultures for its healing and beneficial effects. The digestive system is stimulated by taking ginger, as it stimulates the production of bile. Ginger is particularly recommended in cases of nausea or problems in the digestive tract. Beyond that, the root stimulates the heart and circulation, helps to lower cholesterol and improves the circulation of the blood. This is due to the inhibition by ginger of the coagulation of the platelets, which is responsible for thrombosis.

Vitamin K1 is found primarily in the green leaves of plants and is transformed in the human body to vitamin K2. Vitamin K is needed in very small amounts for the coagulation of the blood. A lack of vitamin K can lead to an increased loss of blood after an injury, which is why it should always be present in sufficient amounts. An overdose of vitamin K does not lead, conversely, to increased coagulation (danger of thrombosis), as the body is capable of controlling vitamin K levels. In addition to calcium and vitamin D, the bones also need vitamin K. Without vitamin K calcium in the blood cannot be bound and stored in the bones.

Calcium is an essential element needed by the body in large amounts for the development of bones and teeth. An adequate supply of calcium is mainly what determines the stability of the bones in later years. In addition, calcium is involved in the coagulation of the blood. Further, the control and functioning of the muscles is influenced by the absorption of calcium. When there are problems with digestion this can lead to a calcium deficiency. Calcium deficiency affects the functioning of the nerves and muscles which can lead to cramping. Diarrhoea can be traced to a lack of calcium.

Iron is a vital, essential trace element. It is found in the human body mainly in the red blood cells and in muscle protein. In the red blood cells iron transports oxygen. For this reason, iron is involved in all oxygenation processes and essential for energy production. Apart from that the trace element is involved in the production of various enzymes. An iron deficiency belongs world-wide to one of the most common nutritional deficiencies. It is estimated that around 30% of the world’s population is affected, which is explained by a low consumption of iron-rich foods such as meat. First signs of an iron deficiency are dry, cracked skin, chronic fatigue and a lack of concentration.

Selenium is an essential trace element which is stored in the human body above in the blood, the heart, the brain, the liver, and the kidneys. As an important component of enzymes, selenium helps to create a defense against harmful by-products of metabolism along with vitamins A, C, and E. The trace element strengthens the immune system and protects against free radicals, UV rays and harmful heavy metals. As selenium is also involved in the production of thyroid hormones, a deficiency can also lead to disturbances in the internal organs. Particularly for those living in regions with selenium-poor soil it can often come to signs of deficiency such as anxiety and self-doubt, even to depression. Taking regular selenium can be of help in these situations.

Vitamin A: for good vision

Vitamin A is a fat-soluble vitamin which the body either takes in through food of builds itself out of pro-vitamin A. Vitamin A is necessary for maintaining a good number of processes. The most important one is vision, which would be impossible without vitamin A. The reason for this is that vitamin A is the precursor for several visual pigments. An effect of vitamin A deficiency is night blindness. In addition, vitamin A influences the composition of the skin and the bones. As vitamin A is destroyed by light, it should be stored in a dark place, which is particularly difficult with vitamin A-rich vegetables such as carrots.