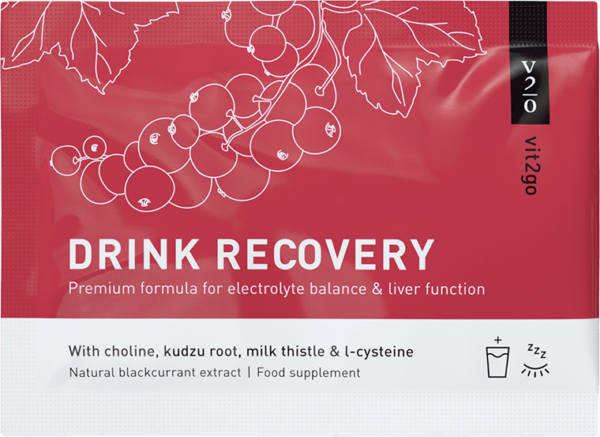 How does DRINK RECOVERY work?

To answer this question, it is necessary to first look at the typical causes of the feeling of discomfort due to the consumption of alcohol: alcohol distracts water and dehydrates the body, which leads to the loss of fluids, important minerals and other nutrients and causes general malaise.

For that reason, an effective remedy against the unpleasant feeling the morning after has to start just there, at that point: rehydrating the body and replenishing nutritional reserves – preferably overnight. Therefore, it is advisable to take the DRINNK RECOVERY already before going to sleep as only in that way can a discomfort really be prevented. DRINK RECOVERY from Vit2go is a natural remedy that combines essential vitamins, electrolytes and other supportive active ingredients. In a word: Vit2go DRINK RECOVERY gives the body back what alcohol takes away. And by the way, the positive effect of DRINK RECOVERY is regularly confirmed by independent studies as well as by our loyal returning customers.

How to prevent a hangover:

The most important active ingredients in detail:

Here you will find the most important active substances in DRINK RECOVERY which can compensate for the nutritional deficits in your body.

Provides oxygen transport and oxygen uptake in the blood

Helps to break down the alcohol

Supports the effect of vitamin C

Vitalise and help with concentration problems

L-Carnitine: Detoxification of the liver

L-Carnitine is a vitamin-like active substance which can be synthesized in the human body from vitamin C, B6, B12, iron, folic acid, as well as different enzymes. In case of a deficiency of one of these substances, the carnitine synthesis may be disturbed. For liver detoxification L-Carnitine is essential because several toxic compounds, which appear due to the breakdown of alcohol, will be linked to the carnitine molecule. Furthermore, carnitine is involved in fat burning and muscle regeneration after physical stress. After alcohol consumption or physical activity an additional intake of carnitine is therefore advisable.

L-tyrosine is a non-essential amino acid which is made from phenylalanine in the body. The latter on the other hand is essential, and has to be supplied through food. L-tyrosine is a precursor of various neurotransmitters. If the body does not synthesize enough L-tyrosine, or is not supplied with it directly, this can lead to melancholia and even depression due to a deficiency. In addition, the positive effects of L-tyrosine on performance under stress have been confirmed. L-tyrosine is also necessary for the production of dopamine, which in turn controls circulation and is popularly known as the “happiness hormone”, as it improves the general mood.

L-phenylalanine is an essential, genetically encoded amino acid which has many functions in the human body. It is found in its natural L-form in many foods, above all in soy. Phenylalanine is needed for the synthesis of important proteins found in the body. Among these are insulin, papain, melanin, and thyroxin. This amino acid is necessary for the removal of toxins from the liver. In addition, phenylalanine has anti-depressive qualities, although it is most often used to relieve chronic pain. Taking phenylalanine as a nutritional supplement is recommended in cases of general malaise (for example as a result of alcohol consumption).

L-ornithine is a partially essential amino acid, which is synthesized by the body from arginine and also supplied through food. The amino acid contributes to the production of urea and has a detoxifying effect as, with its help, excess ammonia chains can be broken down. Ammonia has a very toxic effect on the brain and prevents the formation of fatigue as well. L-ornithine promotes a good night’s sleep, for that reason. As L-ornithine is involved in the synthesis of various enzymes, it is of importance to the entire metabolism.

The eight B vitamins serve as precursors for co-enzymes in the body and play a key role in many metabolic functions. For example, B vitamins are essential for the digestion of protein, sugar and fats and are needed for the formation of skin tissue, hormones and neurotransmitters. A lack of individual B vitamins, or an uneven distribution of them, can be problematical, and for that reason the vitamins are usually available as a vitamin B complex. In this way, a balanced intake of B vitamins is guaranteed. Symptoms of vitamin B deficiency are manifold and can range from disturbances in the digestive tract or the nervous system to dry and cracked skin, or even fatigue and difficulty in concentrating.

Vitamin C is an essential nutrient, which is also called ascorbic acid. The human body cannot make the ascorbic acid molecule itself as it lacks the corresponding enzyme to do this. For a healthy metabolism, however, vitamin C is essential, which is why it must be taken in with food. Vitamin C is involved in the synthesis of various enzymes and neurotransmitters. By means of its antioxidant effect, it is also a scavenger of free radicals and supports the detoxification of the body. A lack of vitamin C can lead to fatigue, immunodeficiency or even to scurvy.

Molybdenum is a vital trace element which cannot be made by the human body itself. It is found primarily in the internal organs, the bones, and the skin and is involved in the synthesis of a number of enzymes, so that it plays a central role within the metabolic system. In addition molybdenum has demonstrated an anti-bacterial effect, through which it can prevent cavities in the teeth. People with a poor and unbalanced diet or suffering from a disorder of the digestive tract have an increased need for molybdenum. Symptoms of an inadequate supply of molybdenum are mild dizziness, stomach cramps and diarrhoea, or an itchy skin.

Vitamin C is an essential nutrient, which is also called ascorbic acid. The human body cannot make the ascorbic acid molecule itself as it lacks the corresponding enzyme to do this. For a healthy metabolism, however, vitamin C is essential, which is why it must be taken in with food. Vitamin C is involved in the synthesis of various enzymes and neurotransmitters. By means of its antioxidant effect, it is also a scavenger of free radicals and supports the detoxification of the body. A lack of vitamin C can lead to fatigue, immunodeficiency or even to scurvy.

The essential trace element selenium is indeed essential, but is only needed in very small amounts in the human body and is supplied through food. Selenium is absorbed by plants in a natural way through the roots and is stored in them. Depending on the region, soils have been depleted due to centuries of agricultural use, which is why it can come to selenium deficiency in some populations. Typical symptoms of a selenium deficiency include psychological disturbances, such as self-doubt and anxiety, which are caused by hormone production in the thyroid being inhibited. In addition, selenium is important for the break-down of pollutants in the body, as it binds readily to these.

Magnesium is one of the most important macro-elements in the human body. In contrast to trace elements it is found in concentrations of over 50 mg/kg in various substances in the body. In its soluble form, the mineral magnesium is also termed an electrolyte. Magnesium is responsible for a variety of functions in the body, for example for conduction in muscle and nerve cells. After the consumption of alcohol, the body attempts to metabolize it, and in this process there is an increased loss of fluids. With this fluid loss, magnesium also gets lost, which is why cramps are one of the symptoms of a hangover. Taking additional magnesium can be of quick help in this case. In addition, a sufficient amount of magnesium is important for healthy bones.

Quantitatively calcium is the most important mineral in the human body. It accounts for about 2 percent of the total weight, with 99 percent of it being embedded in the bones, and only about 1 percent in the body cells and the intercellular space. Besides the structure of the teeth and bones calcium is important for the proper functions of muscles and nerve cells. A lack of calcium can for example lead to muscle cramps. Furthermore, calcium is involved in the regulation of the acid-base balance in the blood. The acid-base balance regulates the pH of the blood, which is of great importance for a proper oxygenation.

Potassium: detoxifies the kidneys and helps with dizziness, loss of appetite and muscle weakness

The mineral potassium belongs, like magnesium, to the electrolytes. In the human body potassium is represented by a percentage of 0.25% of its mass and regulates along with sodium the turgor of the cells. Beyond that potassium is responsible for the conduction of nerve signals and the detoxification function of the kidneys. Normally potassium is supplied in sufficient amounts through food. With increased loss of fluids, however, for example with alcohol consumption, vomiting or diarrhoea, there is generally a potassium deficiency as well. Symptoms of a potassium deficiency can be dizziness, loss of appetite and muscle weakness.

Zinc is a metal which is needed in very small amounts by the human body for a variety of processes. The body needs zinc as a building block for enzymes which control digestion and are therefore essential to survival. A lack of zinc can lead to reduced productivity, to a weakening of the immune system, or to loss of appetite. With a considerable loss of fluid due to diarrhoea or after an increase in alcohol consumption, zinc should be taken as a supplement. Furthermore, zinc offers the cells of the body protection against oxidative pollutants which accumulate due to smoking or poor nutrition.

The trace element chromium is needed by the human body for the regulation of blood sugar levels and has to be taken in through food. Only when sufficient amounts of chromium are present in the body the blood sugar can be lowered by means of insulin. During physical exertion, times of stress or an excessive consumption of sugar it can happen that chromium is used up faster than it is replaced. In such cases, the chromium in the body should be replenished with nutritional supplements or by eating foods with a high chromium content, such as eggs or mushrooms. A lack of chromium can lead to reduced productivity, muscle weakness and even to circulatory disturbances as a result of an elevated blood sugar level.

Vitamin D3: pro-hormone for fatigue, loss of concentration and signs of ageing

With vitamin D3, we are actually dealing with a pro-hormone, that is, a substance in the human body which is transformed into a hormone (calcitriol). As a hormone, calcitriol regulates a variety of genes, either switching them on or off. It is assumed that more than 1,000 genes are regulated by vitamin D3 in this way. Beyond that, vitamin D3 has additional important functions such as the strengthening of bones and the inhibition of the spread of pathological cells. As vitamin D3 also protects various tissues from the processes of ageing, it is contained in many anti-ageing products. The initial symptoms of a vitamin D deficiency are fatigue and a decreased ability to concentrate. 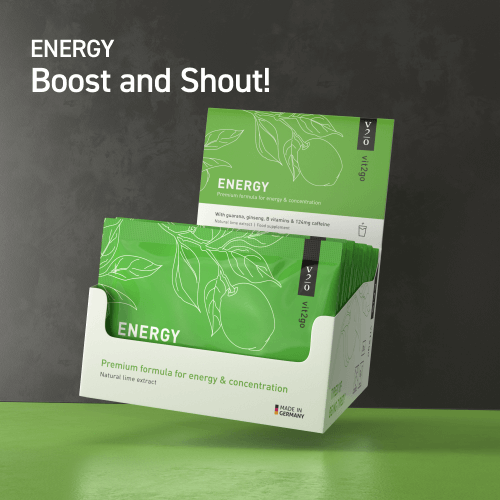 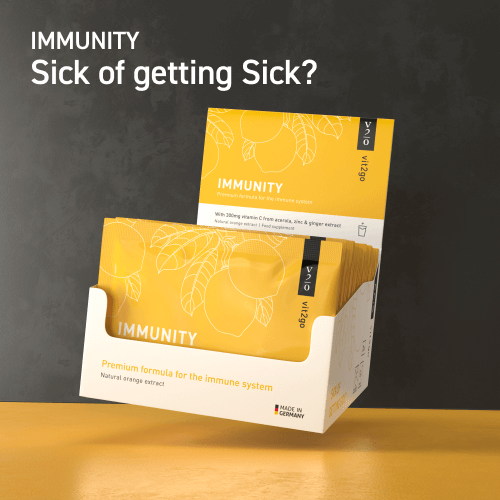 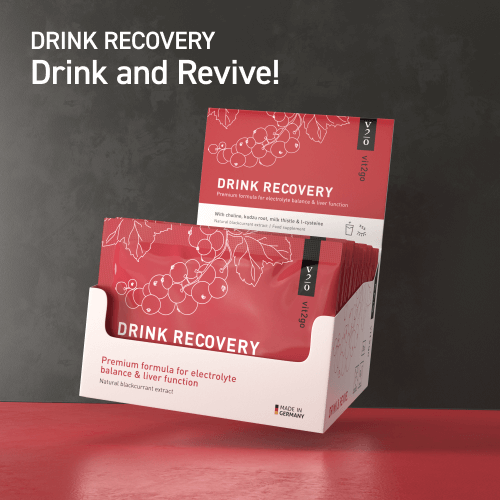 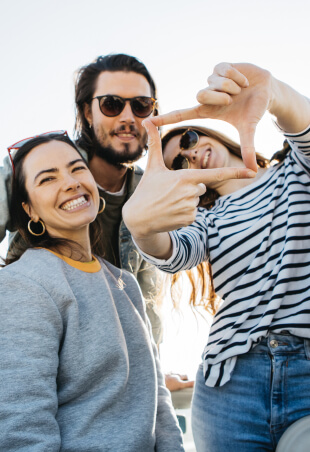